Skip to content
I was very excited to blog about this season before it begins. I had just started this blog (and transfered my old posts about Survivor to it) and I swore to myself that I’d cover it in as much detail as possible no matter what (on previous seasons, I have bee guilty to skip my reports at times). Probst had talked about it as one of the best seasons ever. The cast looked good and interesting… This was going to be exciting.Now, that the season is coming to a close, I almost regret having done so. How many hours – hours I will never have back – have I spent blogging about this embarrassment of a season? The things one does for just a TV show…

Season 23’d better be good or my love for Survivor may just not recover.

Meanwhile, homework has to be done and I still have two entries about this season to do. 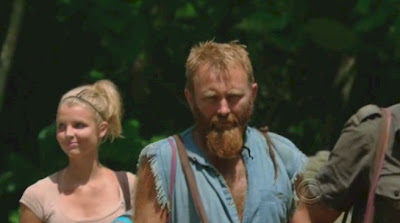 – Andrea Boelhke lives another day: It seems that she expected a warm welcome at Redemption Island. Reality hurts, as Andrea has learned the hard way during those hours between being blindsided by the people she trusted blindly and the cold shoulder she got from Matt and friends. Her exchange with Matt was interesting, blaming each other for not jumping ship with Zapatera at the merge (and both had valid points). It was also adding salt to our wound, us viewers, as they didn’t just rob themselves of a chance to win the game, it’s their inability to take action of the merge that made this second part of the season so lame and borderline unwatchable. Let’s not forget that.

– Matt Elrod lives another day: Did he arrive third this time around? Matt ceased to interest me too. At this point it seems obvious that he will be the one returning, and if he wins this season, it will be quite embarrassing.

– Mike Chiesl lives another day: He really has been dominating these post-merge challenges on Redemption Island, and if he manages to return to the game, the remaining people (I can’t really call them “constestants”) there should be very afraid, as if he makes it to the end, he’ll win it all for sure.

– Ralph Kiser is the fourth member of the jury: Goodbye Ralph, I liked you even if I didn’t always understand what you say. I really hope he gets invited back to a future All-Stars edition, although it’s unlikely.

Finally, they’re (sort of) playing the game. And by play the game I mean “think of betraying each other, but still letting Rob calling all the shots”.

– Ashley Underwood: Oh, she won immunity, which made Grant’s backstabbing come one episode early. That my friends is great game play and great material for a good episode… Mmmm…. Not…
– Grant Mattos sent to Redemption Island: Well, all I had to say about Grant this week was said last week (for those who missed it: he’ll still trust Rob blindly and he’ll get blindsided if he doesn’t win immunity). What’s crazy is that he’s so in love with Rob, that in his confessional on his way to Redemption Island, he’s still unsure that it is Rob who betrayed him. Dude! Get a grip, who else could it be?
– Natalie Tenerelli:She didn’t get voted out because she’s more clueless and more useless than Grant. That’s gameplay!
– Former Federal Agent Phillip Sheppard:So this week, he antagonized the girls. Not a good thing for Rob, but maybe not such a bad thing for him, as he knows Rob wants him in the end next to him, and fighting with the girls is a good way to tell Rob, “see, those two girls in the jury” will vote for you, not for me, so this is where they belong”. Of course, I may just be giving too much credit to Phillip. I could also underline, that just like those two girls, not once he thought of a final three scenario with no Rob in it.
– Boston Rob Mariano: Rob is back! In case people had forgotten, what Rob is best at on this planet is not playing Survivor (although he’s pretty good at it when he has no competition), it is backstabbing his friends. Apart from that, at this point, he seems pretty well assured of a spot in the final three, unless the returning player from Redemption Island magically convinces the remaining players at that point to vote him out. Can he win? Well, we’ll see the possible scenarios in a few paragraphs.

Hard to guess which way the jury will go with 8 people still technically in the game.
But on the other hand, jury votes could be quite predictable this time around for obvious reasons.
Let’s see who could get which votes:

– Andrea Boelhke: If she makes it to the end, I doubt she’d get many votes. Grant’s maybe… Phillip’s if he’s not in the final three?

– Ashley Underwood:She’d get Natalie’s vote, if Natalie was voted out by Rob, but I assume it’s the only vote she can get. Can the Zapatera people vote for her against whoever else would be sitting next to her? Maybe one (who? why?).

– Grant Mattos: Could he win if he returned to the game? If he hadn’t been voted out at all, he was a favorite to win it all. But for some reason, now that he is on Redemption Island, I have the feeling that this has hurt his chances to do so, unless he’s sitting next to Ashley and Phillip of course.

– Matt Elrod: Matt gets to the end, Matt wins. He’ll get most if not all of the Zapatera votes.

– Mike Chiesl:Same as Matt. If he’s in the final, he’ll get all of Zapatera votes, Matt’s and possibly Grant’s.
– Natalie Tenerelli: She’ll get Ashley’s vote. Maybe a few more if she’s sitting next to Rob and Phillip. She could actually win, and that’s a scary thought.
– Former Federal Agent Phillip Sheppard: This is quite simple, either at the final tribal council, Phillip reveals (and manages to prove) that he was actually a super spy and that he has played every one, shooting crew included. In that case, he wins by a landslide. Either he doesn’t, and I don’t see how he could get a single vote, no matter who is sitting next to him.
– Boston Rob Mariano: And the big question everybody has been wondering: Can Rob win? I guess he can sitting next to Ashley and Phillip, or rather Andrea and Phillip. Other make ups of the final three? I seriously doubt he can.

And you? What do you think? Who do you think is out next, will come back from Redemption Island and who will win it all?

19 thoughts on “Survivor 22 – Redemption Island: Too Close for Comfort”