Skip to content
I know, this blog has mostly bee about Survivor lately… Sorry about that if you don’t care about it (just learn French and go read my French blogs). I’ve been a bit busy with other things (including redesigning layouts and stuff), but I promise I’ll talk about other things soon (including trying to catch up with my Lost analysis).
But in the meantime, this season keeps on delivering. Every week, it’s great episode, after great episode. I hope things stay the same after the merge (I’m afraid things become predictable then, but who knows).
Heroes 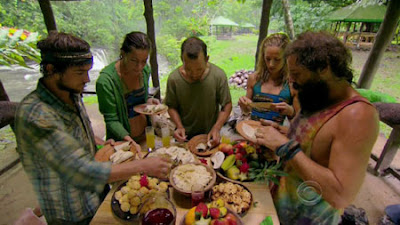 Finally they’re starting winning. Is that the same thing that what happened several times before: the team that is left to 4-5 members sticks together and makes it til this end? Maybe. But I’m not confident about that. This team is just not united enough. Well, in the meantime, let them enjoy their good moments, the merge is most likely coming and it won’t be easy. I’m sure JT still hopes to get Coach and whoever he’s allied with is he is, and same thing for Amanda and Parvati. And I kinda do to, that would shake things a little.
Amanda Kimmel

Not much of Amanda this week. I don’t really have anything to tell about her today.

Candice Woodcock
Candice was really good in challenges, and she seems to have gotten close to Colby (and I’m not saying this  because of the ass groping thing at the end of the reward challenge), not sure if this is a good move, but she’s desperate. She kinda kicked ass in the challenges this week too, which brings us to…
Colby Donaldson
So is this what he needed for a wake up call? Finally he started showing what he had in his guts, it was damn time. That won’t really change anything to anything, he still can’t play strategically, he still has no allies (except maybe Candice now), he won’t be able to go to the end of this game. But he gave a good and much deserved break to the Heroes tribe.
James “J.T.” Thomas, Jr
Not much of him this week either, except this very interesting – and smart – idea about the new hidden immunity idol; to find it as a group and to keep it for the merge. Indeed, unless the Villains tribe is extremely divided – which it is right now, JT will be the obvious target when the merge happens, so if he could play the hidden immunity idol then, that would give the Heroes an edge that they could (but can they?) use to get further in the game and take the advantage over the Villains.
Rupert Boneham
“Fantastic Fice”? What “Fantastic Five”? Just because your team has won two challenges it suddenly is “fantastic”? And can you remind us why the 5 other members are not there anymore then? Also what was that with Russell during the challenge – or rather after the challenge? Not very heroic for somebody that wants to be all “I’m a Hero, blah, blah, blah”, especially after a similar action against Jerri a couple of weeks ago. 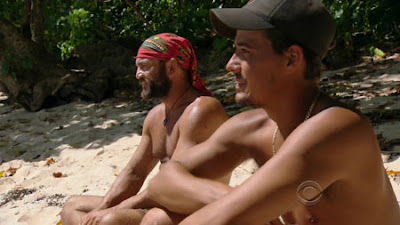 Wow, I guess – as it’s been mentioned during tribal council – Tyson really was the one that held the tribe together (that’s because he’s awesome, and to prove it, see he still being mentioned and I’m still using “awesome” and “Tyson” in the same sentence even after he was voted out)… Well, him and the fact that they were winning challenges and didn’t have to go to tribal council.
And finally, the showdown between Russell and Boston Rob came to a conclusion. Some people may think it came too early, but I don’t think so, had it dragged on until after the merge, it would have become too distracting. Also, this opposition between them what the main reason – I think – that the other players don’t get much camera time in this tribe and why we’re rarely getting any confessionals from the confessional queens that Courtney and Sandra are (not mentioning Tyson, the king of confessional comments who got robbed).

The future will be interesting for this tribe. Everything seems to indicate that the tribe is gonna self-destruct like so many tribes in its situation before, but it won’t really matter, because with those players I have the feeling that the terme “individual game” could be redefined this season once the merge occurs.

If there’s no merge and the Heroes go, Colby is gone (didn’t I write this before?).
If the Villains go, Sandra or Courtney are in trouble. Maybe Sandra more, as I assume Courtney made more friends.