What’s up with the word “ship” in the last 3 episode titles?
I thought the show had a deal with Sprint, not with Ship (I know, that’s a bad joke).

Ok, as this is most likely going to be my last Survivor post of the season -I won’t really be able to blog in the next few weeks as I’ll be traveling a lot and all, and I doubt it will be very relevant to blog about the season finale three weeks after it aired- I’ll do things a little differently. Sure, I’ll wave bye bye to Rupert, but then I’ll mostly assess the chances of winning of each remaining contestant. 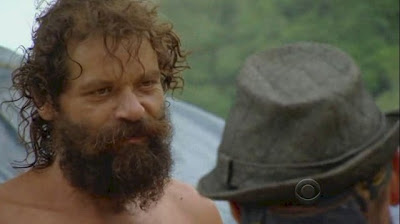 He had a strange season, where his “myth” got badly hurt. The gentle giant pirate turned out to be an annoying big idiot most of the time this season. I gotta admit that after the merge he did a bit better, even had some good moves (like the “fake” immunity idol in his pocket), but overall he was a let down. Rupert never was very strategic at the first place, but he hadn’t played in 12 seasons, and I’m not sure he followed the show as closely as he should have, because he seemed pretty unaware about how the game has changed since. I also think that he was too “camera conscious” always trying to appear like a reliable good guy, a hero and whatnot. Oh well.
The final Five now
Colby Donaldson
If Rupert was a letdown and his myth was badly hurt, what can I say about Colby? The original Survivor hero is now nothing, a zero. He still can’t play strategically at all, he sucks at challenges like I’ve never seen a strong guy sucking at challenges before. He’s the last remaining Hero for one reason and one reason only: he’s not a challenge threat. Ironically though, if he makes it to the end, he’s almost sure to win, as he is the one with the most friends in the jury. If he won, that would suck a lot.
Jerri Manthey
If Colby and Rupert’s images have been forever hurt by this third stint at Survivor, there’s one person that had some image problem and who fixed it (whether it was her goal or not) and it’s Jerri. In Australia, she was the original female Villain, everybody loved to hate her. In All-Stars she was kinda inconsequential but she managed to leave the reunion show halfway through because she got booed by the audience so bad. But this season, she really redeemed herself. Sure, her game is still way below other big players, but the bitch seems to be gone, and she even was likable on several occasions. Still, I doubt she has many chances to win, as she’ll most likely be considered as a coattail rider by the jury.
Parvati Shallow
This season, Parvati has proven one thing: win or lose she is indeed one of the best players to ever play this game. Everyone was gunning for her in the beginning, she was an obvious pre-merge ousting (like Cirie was) and let’s admit it, was it not for Russell’s idol and Tyson’s blunder she would have most likely been voted out pre-merge (and yes, I managed to mention Tyson one last time!). But since that infamous vote she totally dominated the game from A to Z. You want to know what’s the difference between a good and a bad player is? Take last episode. After Danielle’s slaughter by Russell last week, a bad player would have muster all of their forces to go against Russell and have him out. Maybe it would have worked, maybe not, but in any case, voting Russell out then would have resulted in one thing: offering one seat at final tribal to Rupert or Colby and one million bucks in the process. A good player will put their anger aside and realize that despise him or not, you need Russell to vote the remaining Heroes out, and you even need him sitting next to you at the final as his chances of winning are close to none. By this move, it’s very likely that Parvati will be sitting facing the jury in the final tribal council. Will she win? Well, it’ll all depend on whether the jury is bitter and not willing to make her win twice or, on the other hand, if they’ll recognize how great of a player she is.
Russell Hantz
Russell played an amazing (ruthless but amazing) game in Samoa and he got robbed at the final vote. But this time, he’s playing exactly the same way, expect he doesn’t realize that he’s playing against more seasoned contestants. That scene where Parvati and Sandra openly mocked him was telling a lot. While everybody feared him in Samoa, this is not the case here, and kinda never was (well, maybe Danielle and Jerri do, but that’s pretty much it). His social game is pathetic, even worse than it was in Samoa, and his strategy -while good- is not better than the ones of Sandra or Parvati. He’s definitely too full of himself, he thinks -because it’s the same location, because he has played both games back to back- that he’s in control of the game exactly the same way, but truth is that he never was totally in control (except a few times I admit). And because of all of this, he just can’t win. He will most likely make it to the end (although, I kinda see the three remaining women as the final three) but he just won’t get enough votes (if any at all) because pretty much everybody hates him on the jury. Russell still hasn’t understood how the final vote works apparently.
Sandra Diaz-Twine
She’s kinda playing the same game as she did in the Pearl Islands, but this is definitely the kind of games that can be repeated. It’s not memorable (I had forgotten how good a player she could be) but it works well. She’s a bit more over the radar and more vocal this time, but I don’t think she has really made any enemies in the jury. Because of that, she also has very good chances to win.

“Let’s get down to the vote”

Let’s see the different possibilities and outcomes:
If Colby is in the final three, he’ll get most if not all the votes of the Heroes and would win in pretty much any case.
If it’s Jerri, Parvati, Sandra, we’re in a pretty interesting situation. There are some sure bets: Coach will vote for Jerri, Courtney will vote for Sandra, as well as Rupert, Danielle will vote for Parvati, Amanda too I assume. The other votes are up in the air and I think that would be the most interesting situation. I’m really curious as whom Russell would vote for. Will he recognize Sandra or Parvati’s game? Or would he be pissed and throw his vote to Jerri? I suspect the latter.
Russell, Jerri, Parvati?
If people are pissed at Parvati, Jerri could win it. If they recognize her talent, she would win.
Russell, Parvati, Sandra…
Here is another interesting one, and a narrow win, whoever wins (I mean, between Sandra and Parvati)
Russell, Jerri, Sandra.
Sandra should win this one easily.
We’ll see on Sunday night…